Nintendo has a long list of game consoles that have been a success in the market, but this model has been the desktop console considered the best of its generation.

In 2016 this retro version was released more modernized and with a smaller size, it also comes with pre-installed video games that will make you move back to the 90s.

Would you like to play with the retro Super Nintendo Entertainment System console and move to the 90s? Once you know the new features of this vintage console that is being so successful and is being so in demand, you will not hesitate to buy it to enjoy at home. 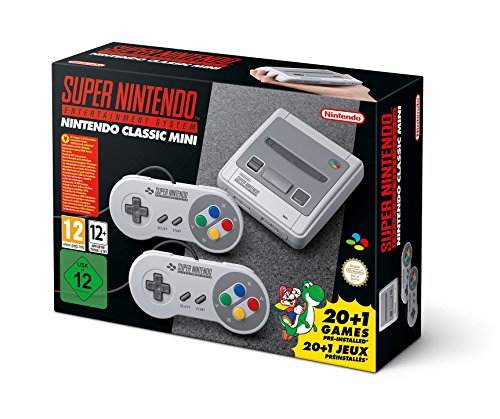 Once you know all the advantages of this retro console full of nostalgia, you will not think twice and buy it without hesitation for a second. Would you like to know the advantages? Keep reading!

What is Nintendo SNES Classic Mini Console? and Why is SNES is consider a retro console?

Among the games that stand out we can find:

What are the best games for Nintendo SNES?

On the Nintendo SNES, all the games it comes with are very good and well-known, but it is true that some must be highlighted such as: Super Mario Kart, Super Mario RPG: Legend of the Seven Stars, Super Mario World, Final Fantasy III and Street Fighter II Turbo: Hyper Fighting and Star Fox.

The Nintendo SNES Classic Mini comes with the HDMI cable. In fact, when you buy the console it includes: Super Nintendo Entertainment System are one HDMI cable, one USB power cable, and two wired Super NES Classic Controllers. Note that an AC adapter for the USB cable is required to play the system but is not included in the packaging.

What is the difference between Nintendo SNES and SEGA Mega Drive / Sega Genesis?

Below we have left you an explanatory video where he clearly explains the differences between the Nintendo SNES AND THE Sega Mega Drive or Genesis.

The vintage / retro Super Nintendo Entertainment System console is one of the objects that every player, collector or fan should have at home to move back to the 90s. This console has a very good price and includes the mini-size console, two controllers and 21 games that will make you never have time to get bored at any time.

It is one of the most demanded and best valued consoles by Amazon customers, having almost complete five stars. It is not difficult to assemble or establish the appropriate connections.

What are you waiting to have yours at home? These consoles sell out super fast !!